An international team of researchers led by Osaka University, The University of Queensland and the National University of Singapore created nanodiamond sensors that can act as both heat sources and thermometers, and is using them to measure the thermal conductivity inside living cells, which may lead to new diagnostics tools and therapies for cancer

Osaka, Japan – A team of scientists from Osaka University, The University of Queensland, and the National University of Singapore’s Faculty of Engineering used tiny nanodiamonds coated with a heat-releasing polymer to probe the thermal properties of cells. When irradiated with light from a laser, the sensors acted both as heaters and thermometers, allowing the thermal conductivity of the interior of a cell to be calculated. This work may lead to a new set of heat-based treatments for killing bacteria or cancer cells.

Even though the cell is the fundamental unit of all living organisms, some physical properties have remained difficult to study in vivo. For example, a cell’s thermal conductivity, as well as the rate that heat can flow through an object if one side is hot while the other side is cold, remained mysterious. This gap in our knowledge is important for applications such as developing thermal therapies that target cancer cells, and for answering fundamental questions about cell operation.

Now, the team has developed a technique that can determine the thermal conductivity inside living cells with a spatial resolution of about 200 nm. They created tiny diamonds coated with a polymer, polydopamine, that emit both fluorescent light as well as heat when illuminated by a laser. Experiments showed that such particles are non-toxic and can be used in living cells. When inside a liquid or a cell, the heat raises the temperature of the nanodiamond. In media with high thermal conductivities, the nanodiamond did not get very hot because heat escaped quickly, but in an environment of low thermal conductivity, the nanodiamonds became hotter. Crucially, the properties of the emitted light depend on the temperature, so the research team could calculate the rate of heat flow from the sensor to the surroundings.

Having good spatial resolution allowed measurements in different locations inside the cells. “We found that the rate of heat diffusion in cells, as measured by the hybrid nanosensors, was several times slower than in pure water, a fascinating result which still waits for a comprehensive theoretical explanation and was dependent on the location,” senior author Taras Plakhotnik says.

“In addition to improving heat-based treatments for cancer, we think potential applications for this work will result in a better understanding of metabolic disorders, such as obesity,” senior author Madoka Suzuki says. This tool may also be used for basic cell research, for example, to monitor biochemical reactions in real time.

Summary: Scientists from Osaka University, The University of Queensland, and the Faculty of Engineering at the National University of Singapore have created polymer-coated nanodiamonds that can be absorbed into cells. Based on changes in their fluorescence properties, the internal thermal conductivity of the cell can be measured, which may lead to new heat treatments that attack cancer cells.
Primary Keywords: Chemistry/Physics/Materials Sciences
Additional Keywords: Acoustics, Atomic/Molecular/Particle Physics, Biochemistry, Biomechanics/Biophysics, Molecular Physics, Nanotechnology/Micromachines, Optics, Polymer Chemistry 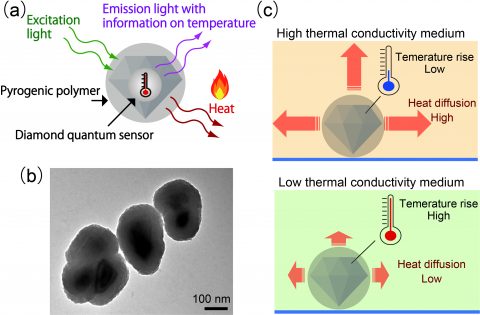 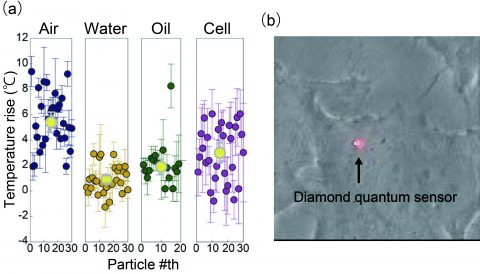 Figure 2.
(a) Temperature increases observed with hybrid sensors in air, water, oil, and inside cell. These results are consistent with the idea that higher temperature increases occur in solvents with smaller thermal conductivities. The literature values for the thermal conductivities of air, water, and oil are 0.026, 0.61, and 0.135 W/m•K, respectively. (b) Bright field microscopic image of a HeLa cell with a hybrid sensor inside. (credit: Osaka University)

About Osaka University
Osaka University was founded in 1931 as one of the seven imperial universities of Japan and is now one of Japan’s leading comprehensive universities with a broad disciplinary spectrum. This strength is coupled with a singular drive for innovation that extends throughout the scientific process, from fundamental research to the creation of applied technology with positive economic impacts. Its commitment to innovation has been recognized in Japan and around the world, being named Japan’s most innovative university in 2015 (Reuters 2015 Top 100) and one of the most innovative institutions in the world in 2017 (Innovative Universities and the Nature Index Innovation 2017). Now, Osaka University is leveraging its role as a Designated National University Corporation selected by the Ministry of Education, Culture, Sports, Science and Technology to contribute to innovation for human welfare, sustainable development of society, and social transformation.
Website: https://resou.osaka-u.ac.jp/en

The most prestigious and widely recognised rankings of world universities consistently place UQ among the world’s top universities.

UQ has also won more national teaching awards than any other Australian university. This commitment to quality teaching empowers our 53,600 current students, who study across UQ’s three campuses, to create positive change for society.

Our research has global impact, delivered by an interdisciplinary research community of more than 1500 researchers at our six faculties, eight research institutes and more than 100 research centres.

About the National University of Singapore (NUS)

The National University of Singapore (NUS) is Singapore’s flagship university, which offers a global approach to education, research and entrepreneurship, with a focus on Asian perspectives and expertise. We have 17 faculties across three campuses in Singapore, with more than 40,000 students from 100 countries enriching our vibrant and diverse campus community. We have also established our NUS Overseas Colleges programme in more than 15 cities around the world.

Our multidisciplinary and real-world approach to education, research and entrepreneurship enables us to work closely with industry, governments and academia to address crucial and complex issues relevant to Asia and the world. Researchers in our faculties, 31 university-level research institutes, research centres of excellence and corporate labs focus on themes that include energy; environmental and urban sustainability; treatment and prevention of diseases; active ageing; advanced materials; risk management and resilience of financial systems; Asian studies; and Smart Nation capabilities such as artificial intelligence, data science, operations research and cybersecurity.