Osaka, Japan – One degree (Celsius) can make a difference: a team of investigators led by Osaka University has demonstrated regulation of a critical protein complex that occurs only at physiological temperature.

To study the functions of various proteins, investigators generally examine purified proteins in vitro. Such experiments are generally limited to temperatures below physiological temperature to prevent thermal damage to the proteins. The team has overcome this problem by applying optically controlled heating with a pulsed infrared laser. “With this method, proteins can be heated up to 40°C without any damage to the proteins,” says lead author Hiroaki Kubota, “which enables us to examine how proteins act at their physiological temperature.”

The investigators applied this heating method to study the actomyosin complex. Actomyosin force generation, which results from the interaction between myosin molecular motors and actin filaments, is a crucial process governing cell motility and morphology. The protein drebrin E has been shown to inhibit these interactions, but its mechanism of regulation is unclear. To clarify the role of drebrin E, the team applied microscopic heating to actomyosin in the presence of drebrin and observed the motility produced by actomyosin force generation over a range from room temperature to physiological temperature.

This temperature-dependent regulation of drebrin E is remarkable and has many implications for future studies. “These results suggest the importance for pregnant mammals to maintain the appropriate body temperature to ensure precise development of an embryo,” says Madoka Suzuki, senior author. Furthermore, gaining a precise understanding of the mechanisms of cellular temperature-sensing machinery, we may be able to innovate the development of artificial nanoscale temperature sensors.

Summary: Investigators led by Osaka University have demonstrated temperature-sensitive regulation of actomyosin, a critical protein complex involved in neuronal development. By applying optically controlled heating, the team demonstrated that the protein drebrin E acts as a switch to inhibit actomyosin motility at physiological temperature, with inhibition occurring above a threshold drebrin E concentration. These findings have implications for understanding the role of temperature in embryo development and for the development of artificial nanoscale temperature sensors.

Tweet 1: Just one degree (Celsius) can make a difference: A critical protein complex is tightly regulated, but only at physiological temperature

Fig.1 Intracellular force is produced by myosin interacting with actin filament (protein filament). Drebrin E can inhibit the actin-myosin interaction, hence regulate the intracellular force. It has been known that the concentration of drebrin E decreases during animal development. However, a correlation between the drebrin concentration and the actin-myosin activity has remained unclear, especially at the physiological temperature. 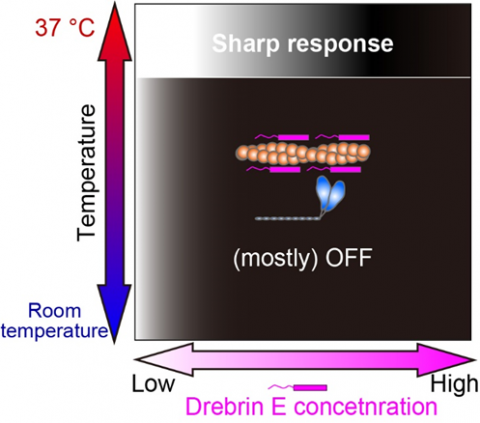 Fig.3 Our study revealed that the regulation of actin-myosin interaction by drebrin E is efficient only at the physiological temperature (37 °C). The white-black gradation represents the force production On (white) and Off (black).

Osaka University was founded in 1931 as one of the seven imperial universities of Japan and is now one of Japan’s leading comprehensive universities with a broad disciplinary spectrum. This strength is coupled with a singular drive for innovation that extends throughout the scientific process, from fundamental research to the creation of applied technology with positive economic impacts. Its commitment to innovation has been recognized in Japan and around the world, being named Japan’s most innovative university in 2015 (Reuters 2015 Top 100) and one of the most innovative institutions in the world in 2017 (Innovative Universities and the Nature Index Innovation 2017). Now, Osaka University is leveraging its role as a Designated National University Corporation selected by the Ministry of Education, Culture, Sports, Science and Technology to contribute to innovation for human welfare, sustainable development of society, and social transformation.