Summary
Using electron microscopy and high-speed atomic force microscopy, researchers show the internal molecular motor behind the gliding mechanism for Mycoplasma mobile to consist of two ATP synthase-like molecules. Sharing a similar structure with ATP synthase, suggesting a common evolutionary ancestor. This synthase-like ATPase is challenging the origin of cells and proteins themselves.

Body
For more than 20 years, Makoto Miyata from Osaka City University has been studying the gliding motility of the parasitic bacterium Mycoplasma mobile (M. mobile). A mechanism consisting of an external “grabbing” structure and internal “motor”, the motor having yet to be clarified on a molecular level. In collaboration with Osaka University and Kanazawa University, his research team used electron microscopy and high-speed atomic force microscopy (high-speed AFM) to reveal that the bacteria’s molecular motor consists of two ATP synthase-like complexes, suggesting an unexpected evolution of the protein. Their findings were published in mBio.

Based on genetic information, researchers have suggested that the molecular motor of M. mobile evolved from a protein that synthesizes ATP, called ATP synthase, although this had yet to be confirmed. ATP is an important substance generated in the mitochondria that provides energy that a molecular motor uses for the movement of nearly all living things, including M. mobile gliding.

“It was recently hypothesized that M. mobile, unlike respiration systems in mitochondria, converts ATP energy into a gliding force with a rotary class of ATP synthase,” said Makoto Miyata. “To our surprise, we discovered the motor of M. mobile to be a chain of two ATP synthases-like molecules, housed within a complex cylindrical structure,” he continued – something that has never been seen before.

The discovery started with the team extracting a cell from M. mobile and isolating its protein units. Using negative-staining electron microscopy, they discovered a twin motor where each motor is structurally similar to ATP synthase. However, the clarification has not stopped here. “We need to see this dimeric ATP synthase chain in action,” stated Noriyuki Kodera of Kanazawa University, “to understand how it facilitates M. mobile’s gliding movement.” Using the state-of-the-art technology high-speed AFM, pioneered at the Nano Life Science Institute of Kanazawa University, the team plans to confirm the rotary nature of the molecular motor during ATP hydrolysis. As the architecture of the gliding motor is like ATP synthase, “it is possible the chains share a common evolutionary origin,” stated Takuma Toyonaga, a research fellow at Osaka City University.

Toyonaga continued, “This discovery of an ATP synthase created a breakthrough in our understanding of the evolution of cells and protein and has brought us closer to understanding the operating principles of motility, which is expected to serve as a basis for the development of nanoscale devices and pharmaceuticals.” 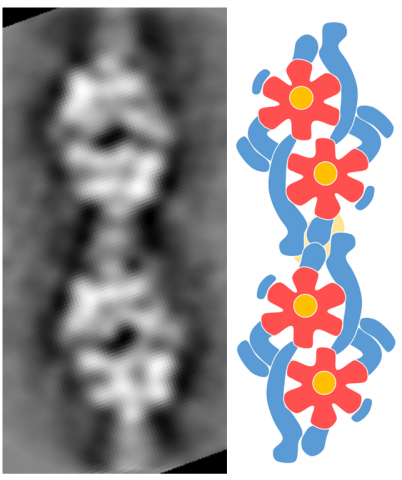 Caption:
Two sets of twin motors are connected. An image reconstructed from electron microscopy (left) and a schematic (right) are shown. The flower like structure colored red and yellow shares its structure with ATP synthase, which is widely spread among organisms.